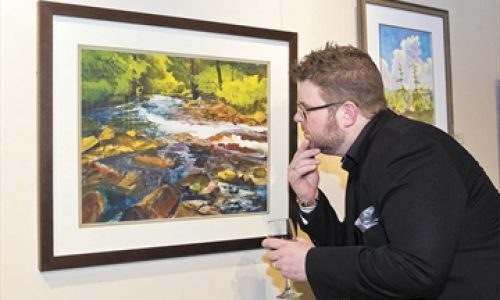 Milton’s cornerstone of creativity was officially introduced to the public this past weekend — with the red carpet treatment for all those responsible for bringing it to fruition.

To highlight a three-day celebration of the newly-opened Milton Centre for the Arts, a red carpet event was held Saturday evening, allowing construction partners, public officials and other dignitaries to share in what’s quickly become a hub of activity and a centerpiece for the town’s artistic and cultural community.

Dipika Damerla, Parliamentary Assistant to the Ontario Minister of Infrastructure and MPP Mississauga East-Cooksville, Mayor Gord Krantz and councillors were among those on hand to mark the project’s completion.

Added Damerla, “Our government is supporting infrastructure projects like this one because they strengthen communities, support local economies and create jobs for Ontario families.”

The governments of Canada and Ontario have each contributed more than $8.1 million towards the initial phase of the facility, which included constructing the new main branch of the Milton Public Library.

The Town of Milton contributed the balance of the project cost of more than $24.5 million. Phase 2 features the 500-seat theatre, which was built simultaneously to provide a full arts and cultural experience for residents of Milton. The total project cost was $39.3 million.

“Were it not for the contributions from our partners at the federal and provincial levels of government, we might not be here today celebrating this historic occasion,” said Krantz.

The new library provides more space for collections, resources, studying and reading, including rooms for silent and group study and perimeter seating.  Technology and automation options further enhance library functionality for the public and staff.

An Investment in the Arts Campaign, entitled “Put Your Heart in the Arts,” reached its goal in February 2011, raising $2.2 million in corporate and personal donations.

The intent of the campaign fundraising was to offset operational expenses and maintain affordable user fees for community groups, while the Centre for the Arts builds towards the implementation of its optimal operating plan.

Along with red carpet reception and Friday’s ribbon cutting and donor plaque unveiling, the weekend featured a host of entertainment, including the musical farce Impresario.

thought you should know

BANG! creative is an Industry Game Changer in Canada

design thoughts, thought you should know

thought you should know

We Know you’re thinking “Oh Hell It’s a Pop UP!”

Pop ups get clicked nearly 100% of the time, yes, sometimes the click is to close! But if your interested, sign up for our newsletter for more info, tips, design and marketing news!

Pop-ups get clicked nearly 100% of the time, yes, sometimes the click is to close!
If you’re interested in learning more about us with insights on marketing tips, design and marketing news, sign up for our newsletter!